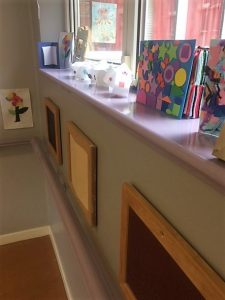 The organisation began life as a small educational centre dedicated to the  needs of people who are deafblind, and is situated within the grounds of St. Joseph’s house, Stillorgan, under the auspices of St. Mary’s School for Deaf Girls in Cabra.  A number of current residents attended the school throughout the 1980s where teachers adapted the Department of Education’s mainstream curriculum to include adapted communication systems, tactile signing and multisensory activities.

Between 1997 and 2006, the Anne Sullivan Foundation purchased four additional houses in the local area. This reflected an effort to move toward a less institutional model of care and promote the independence of service users. The centre itself was renovated and now boasts a number of therapy rooms that are open to service users around the clock, including a multi- sensory room,  jacuzzi room and gym.

Since 2010 The Anne Sullivan Foundation has been developing it’s Outreach service  offering assessment and support services to people who are deafblind throughout Ireland.

Any cookies that may not be particularly necessary for the website to function and is used specifically to collect user personal data via analytics, ads, other embedded contents are termed as non-necessary cookies. It is mandatory to procure user consent prior to running these cookies on your website.

Analytical cookies are used to understand how visitors interact with the website. These cookies help provide information on metrics the number of visitors, bounce rate, traffic source, etc.

Performance cookies are used to understand and analyze the key performance indexes of the website which helps in delivering a better user experience for the visitors.

Advertisement cookies are used to provide visitors with relevant ads and marketing campaigns. These cookies track visitors across websites and collect information to provide customized ads.

Undefined cookies are those that are being analyzed and have not been classified into a category as yet.